Milford Fish Festival was off the scale!

At 9.00am on Saturday morning the sun was shining, the flags were flying, and the team was ready to welcome an estimated 3,000 visitors to celebrate the launch event of this year’s Pembrokeshire Fish Week. Well, to say we underestimated the numbers was a bit of an understatement (100% under, to be precise!).

A carnival atmosphere swept through the whole area, and the enjoyment was infectious! People coming to and from the event were greeted by delicious smells of sweet treats, street food and fish-themed menus from the eateries at Milford Waterfront and they were bustling right through the day and evening! The shops here also got into the spirit of the event, making the most of the glorious sunshine, and welcoming lots of new visitors through their doors. Bristol Channel Yachting Association chose Milford Marina as the location for their Seafair Rally to coincide with the event, and it was quite a sight to see lots of boats dressed for the occasion, with brightly colour flags and bunting blowing from the masts.

The Fish Kitchen marquee was busy all day. Ellen Picton from Healthaspire welcomed 60 junior chefs-in-the-making and showed them how to cook fish cakes and make delicious honey cheesecake, before she prepared Thai fish cakes in front of an audience herself. Through the day, visitors were treated to fantastic cookery demonstrations from local chefs, including Ben Gobbi from COCO’s Restaurant who cooked monkfish wrapped in Parma ham, Joshua Bromwell from The Olive Tree who invited the audience to ‘check out his mussels’ (sporting his green Milford Waterfront sunglasses throughout), and a special appearance from Douglas Balish, head chef at The Grove of Narberth, who prepared a sea bream dish with oyster, cucumber and jalapeno sauce. Neil Walters from Pembrokeshire Scallops gave a scallop shucking demonstration, and a crab and lobster masterclass from Jono Voyce of Solva Seafoods at the end of the day was watched with great interest. Expert fishmonger Nick Bryant was also on site through the day, demonstrating the best way to fillet and prepare a wide variety of fish.

Younger visitors were spoilt for choice at Milford Fish Festival! Girl Guiding Pembrokeshire took over the Pier Head Picnic Area with children’s games and fun activities, including an interactive fishing pool. Milford Waterfront’s very own In House Crafts helped visitors to make over 200 fish stick creations in their workshop. PAT Ponies’ mini ponies called in to greet fans, and Gabrielle Swales added sparkle to lots of smiling faces with glitter face paints through the day.

Darwin Centre and Silent World were on hand to teach visitors all about marine life and the marine environment, and Pembrokeshire Marine Special Area of Conservation brought along tanks of fascinating large shellfish. After all, it wouldn’t be a fish festival without getting the chance to hold a crab, would it?

The brilliant local businesses and producers exhibiting at the event were all busy and enjoying higher than predicted visitor numbers, as well as the sunshine, of course. On the water, the Mackerel Stage was popular all day long, with Discover Coast and Cleddau and Dale Sailing both offering taster boat trips. We also had a visit from RNLB Mark Mason from Angle RNLI, which was open for visitors to take a look around on the day. Lots of people gave canoeing a go with Paddle West off the slipway in the marina.

There was no chance of going hungry at Milford Fish Festival! A tasty choice of freshly cooked street food with a sea-themed twist was available from the colourful food traders at the event, giving us a taste of what’s in store for Milfood Haven Street Food Festival on 17th & 18th August.

Pure West Radio kept everyone entertained through the day with live music from local performers, including Kyle Kirkhouse, Rosey Cale and Chris Didcote as well as high-energy dance performances from Kelly Williams School of Dance and Tap Fit! The Rick Berry Trio were a perfect act to end the day, playing classic rock and roll numbers from the 50s as the sun began to set.

The talk of the day was the ‘Milford Chowder Trail’ – with 7 restaurants contending for the coveted Milford Chowder Champion crown. 100 people participated in the trail, which took in sample stops at Foam, The Harbourmaster, Gordon Bennett's Traditional Fish and Chips, The Lounge, The Olive Tree, Martha’s Vineyard and COCO’s Restaurant. Competition was close, with many commenting that no two chowders were the same, and that all restaurants had tried to put their own unique twist on their dishes. In the end, the scores spoke for themselves, with reigning champion COCO’s Restaurant being awarded the Milford Chowder Champion bowl once again this year!

Watch this space for news on Milford Fish Festival 2020! 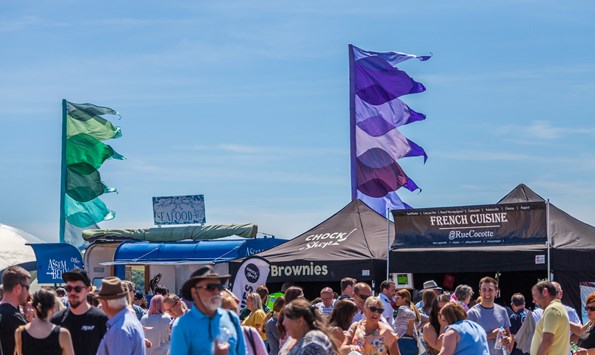 Milford Fish Festival was off the scale!